We have been very busy here at BRUK360 juggling many projects that are in different stages, filming, post-production, production for events and lots of planning for different projects that started lining up for the rest of the year, cool stuff coming up, watch this space guys! Also we couldn’t miss the BVE earlier this month that happened at the Excel Centre, only a 10 minute drive from our HQ in East London.

BVE is the UK’s leading Entertainment and Media Tech event, with a 20-year history dedicated to the broadcast, production and post-production sectors. In recent years, the show has evolved into an all-encompassing event that also covers the Connected Media, AV Systems Integration, Live Production, VR and creative sectors. It attracts more than 15,000 visitors who attend to discover and learn about the latest products, services and trends from more than 300 leading manufacturers and distributors. We went there only focusing on what’s on for 360 & VR, and what’s coming next.

The first thing we wanted to see was the latest 360 professional camera some people in the industry are raving about. Even with the price drop, from £40K to £34k, Nokia OZO still has so many limitations which can sometimes be frustrating. From being unreliable as it can overheat like other cameras we know, to being a nightmare for post-productions due to crazy amounts of data and it takes ages to process. Anyway, I’m glad we were introduced to the Mini Eye at the BVE.

360 Design‘s Mini Eye is the range of bespoke smaller VR rigs built around the Blackmagic micro cameras, ranging from 3 to 10 cameras per rig, which they are supplying to leading VR cinematographers, broadcasters, internet companies and production companies.The most popular versions are our Mini EYE™ 3 and Mini EYE™ 4. Prices range from £10k for a full rig package, including cameras, lenses, recorders, flight case, and accessories, depending on specifications. They currently offer the popular Mini EYE™ 3, designed primarily for live 360 and event use, as well as the popular Mini EYE 4™, designed for more cinematic use, or where heavy post production is anticipated.

For the first time at the BVE we could see first-hand the latest VR content by UK production companies like BBC Earth and Sky VR. As well as immersing ourselves into sports, cinematic film, wildlife and branded content VR experiences, we could explore VR’s full potential through a series of panel discussions, case studies and demonstrations.

Sky have a major commitment to the production of high quality VR experiences and in 2016 launched their new in-house facility Sky VR Studios, and more recently, the SKY VR App. Download the free app here: Iphone or Android. Sky transports fans of sports, movies, news and entertainment to locations around the world, offering a truly unique perspective on major events. The app has over 40 individual pieces on content available, and at BVE we were able to experience some of their latest sports content; trackside at Silverstone or ringside seats watching Anthony Joshua! 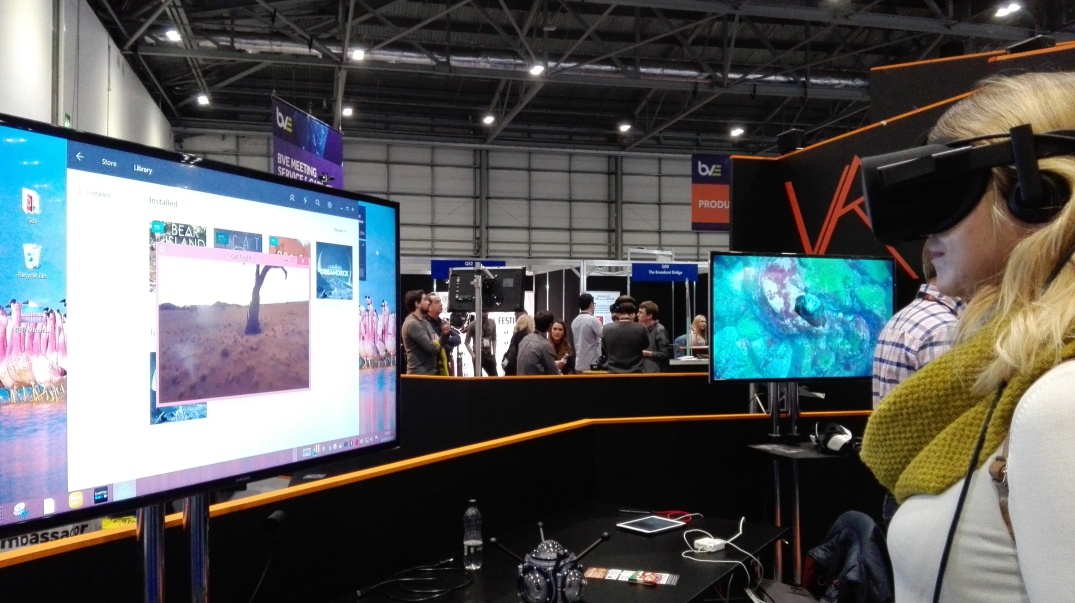